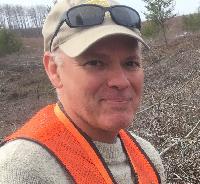 Dickinson's current research is focused on the links and feedbacks between fuels, fire behavior, and fire effects. Fire effects of interest include relatively direct effects, such as soil heating and tree injury and mortality, and longer-term effects on vegetation development and wildlife habitat. "Fuel ecology", the feedbacks among fuels, fire behavior, and vegetation, is being examined in the Ohio Hills and Wisconsin. Work on the effects of prescribed fire regimes on reptile and amphibian communities and their habitat at Land Between the Lakes National Recreation Area is coming to completion as is research on the interactions among White Nose Syndrome, prescribed fire, and populations of bats and their insect prey at Mammoth Cave National Park. Accurate measurement of active fire continues to be a key component of Dickinson's fire behavior and effects work, requiring development of ground and airborne measurement methods. A reliable, well understood, and easily used radiation sensor is under development and a complete set of airborne measurements is being analyzed. As in the past, collaboration with colleagues with complementary skills (e.g., physics, engineering, tree physiology, wildlife ecology) is central to Dickinson's research approach.

Past research is prelude to Dickinson's current research, having focused on predicting the relatively direct effects of fires on trees and wildlife using models and measurement. Understanding the direct effects of fire requires FireStem and FireStem 2D were developed to allow prediction of tree stem heating in fires while physiological effects of crown heating were also considered. In analogy to fire effects on trees, the risk associated with forest bats roosting in prescribed fire areas was examined. Roosting bats enter torpor (a daily hibernation-like state), increasing their vulnerability to heat and gases from fires. Active-fire measurement development began with an examination of the use of thermocouples in fires and culminated with the application of new ground and airborne measurement methods in the Prescribed Fire Combustion and Atmospheric Dynamics Research (RxCADRE) project.

Why This Research is Important

Wildfires and prescribed fires are a central concern of the US Forest Service, accounting for a large portion of its budget and the work of its employees. Colleagues' and my research focuses on developing fundamental understanding of fire dynamics and resulting fire effects on fuels, vegetation, and wildlife with the goals of improving both the state of the science and its application to management.

Scientists are building capacity to do space-based fire effects mapping and post-fire monitoring as a means of strengthening ongoing national programs. A key part of that effort is figuring out how to predict fire effects from remotely-sensed information. Results of a recent study demonstrate one approach.

Exclusion of fire from eastern mixed-oak forests is widely understood to be an important explanation for difficulty in regenerating oaks. Forest Service scientists studied whether the change in species composition of forest floor litter, as species composition shifts to more mesophytic and less fire tolerant species over time, could be a barrier to successful use of fire to restore oak ecosystems.

Forest Service scientists developed new models of tree-stem heating that are the most physically realistic to date to predict tree mortality more accurately. Trees stems are heated unevenly in wildland fires because a standing-leeward flame develops as a result of the interaction of the bole and flame. Forest Service fire scientists and their research partners used the Wildland-Urban Interface (WUI) Fire Dynamics Simulator to describe uneven heating of the stem surface and the newly revised FireStem2D to simulate the resulting stem heating and injury.